So, a few years back, I managed to find myself a lathe. Schaublin 102 precision toolmaker's lathe, sold as "not working" and with a lever actuated cross slide. Was actually working fine, but required a 220V three phase supply, was also supplied with a whole bunch of other stuff, milling machine dividing head and tailstock, another dividing head, a metric crapload of lathe and mill tooling, collets, so on and so forth. This was a bit of a steal, as it came in for the grand sum of 100€. I then picked up another similar machine (ARE rather than Schaublin) with 2 dial equipped cross slides, W20 headstock, F23 headstock, standard tailstock, rapid action W20 tailstock with W20 turret, more assorted bits and pieces, all for 300€. Having sold on quite a lot of bits that came with the 2 which were never going to be used, or were doubled, the two machines owe me nothing. And the bits I've made with them mean I'm at a healthy profit.

Here's the Schaublin in the workshop, modulo having an ARE cross slide on it it still looks a lot like this : 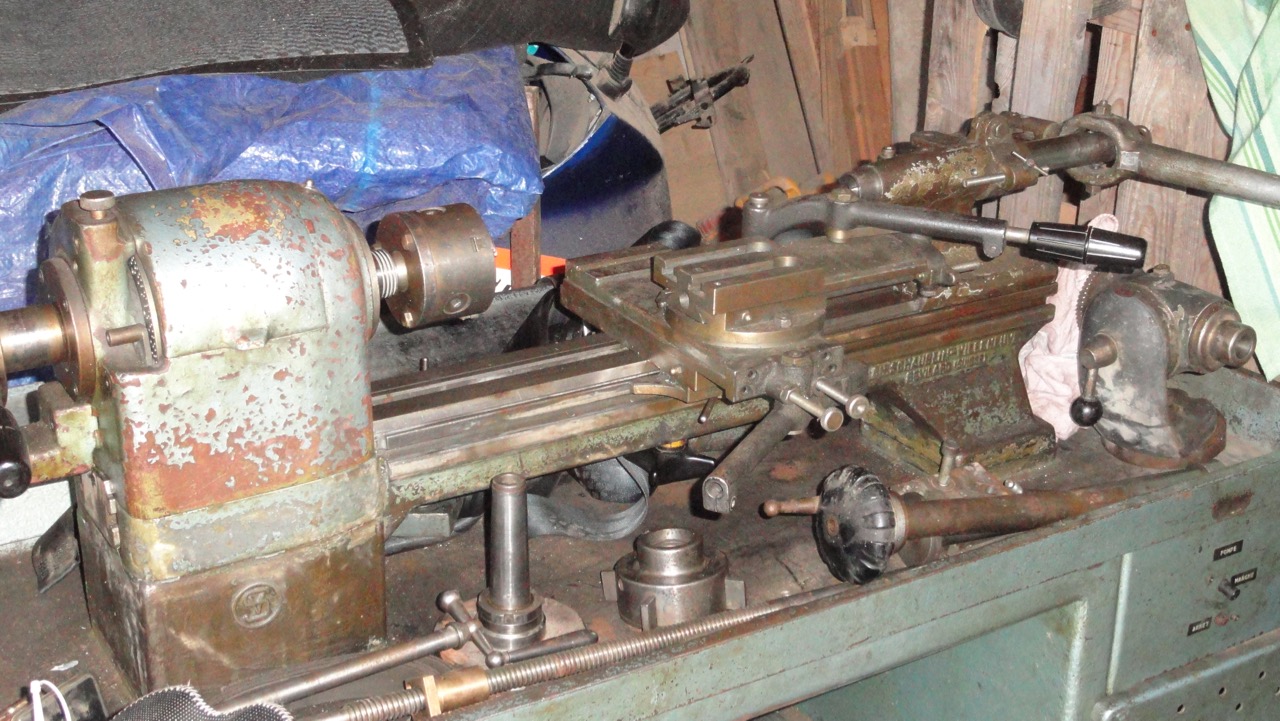 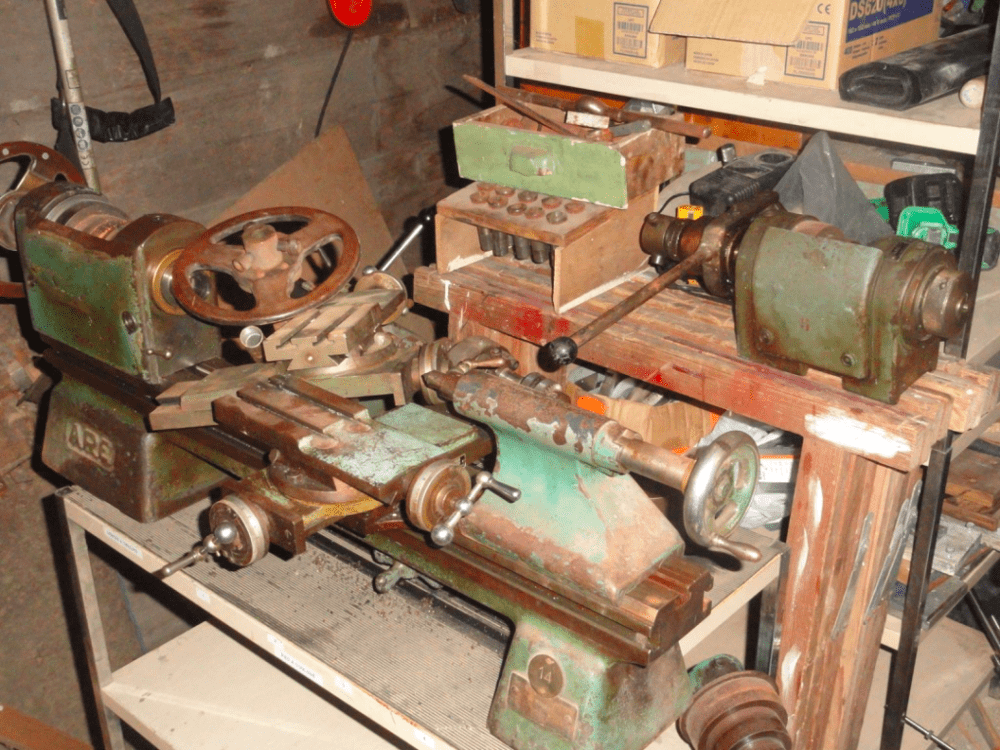 And got tarted up rather than being instantly put to work : 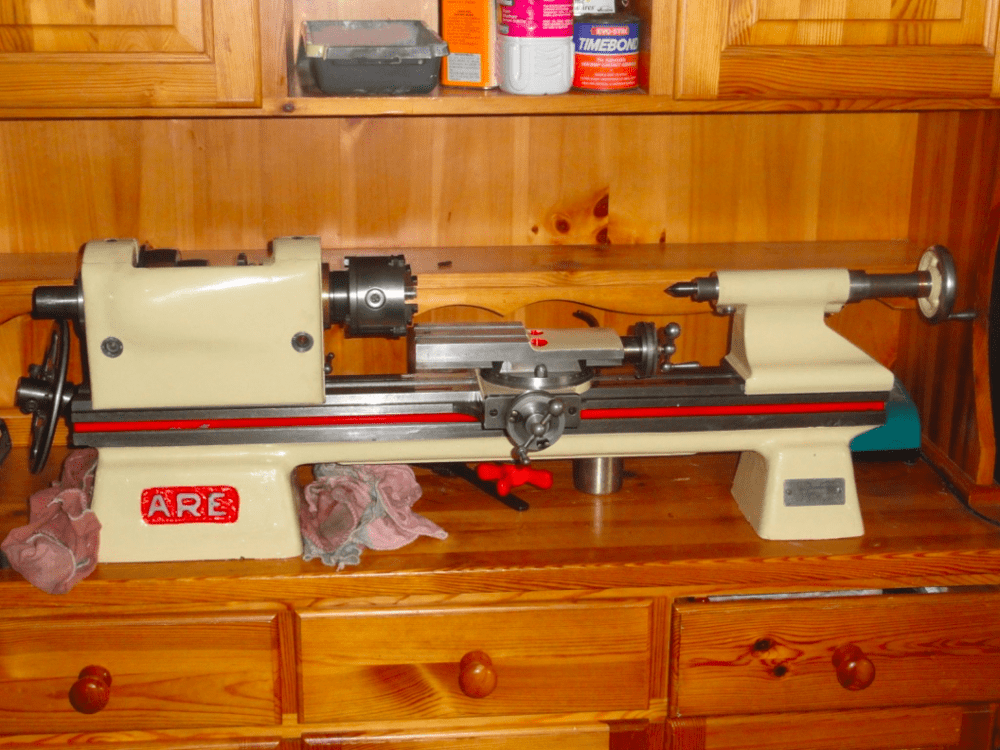 But I've had an urge for a milling machine. Similar sized, not some goddamn behemoth, mainly because there's no room in my workshop and getting there means going over the septic tank - a 2 tonne lump of cast iron is going to have problems with that latter little "feature". So I've been watching the small ads. All too big, or too expensive, or too far away, or "too late, already sold". Until a couple of weeks ago. "small milling machines". 2 very unflattering photos of 2 largely dismantled machines, apparently missing major parts. "make offer". "possibility of delivery". Phone up. Yes, still for sale. Nothing particularly critical missing from the machine that interested me (handwheels and lead screws, and the vertical head). Hrm. Okay. "What sort of money are you looking for? What's your idea of a sensible offer?" "Dunno, what can you spend?" "As it stands, it's not worth much more than scrap value. 150 euros?" "Fine. I can deliver on Friday of that's OK with you". "Sorry, what?" "I can deliver on Friday. No extra charge." "Urm - Okay, done".

Cast iron is at 24 centimes a kilo at the moment. Machine weighs in at 450 kilos. Scrap price would have been slightly over 100€, collected. This bloke drove 3 hours to deliver, between fuel costs and motorway tolls, he's made nothing. o_O

So Friday afternoon arrived, and the mill man cometh. OK, it looks very grotty, but hey, the table is there and looks OK, for starters there's no scarring. Hand over the cash, unload the machine. Little box of parts with it, in it are the gibs. The scraping marks are still very much in evidence. On the gibs. And, it turns out, on the slideways. This machine has barely been used. Spindle turns like a swiss clock. Under 2 microns of play. Motor looks good, sounds good turned by hand (haven't powered it up yet), mechanical speed variator works, although needs de-rusting. Even the belts are good. Cleaned up the table, assembled on the transversal, it's silky smooth pushed by hand. It's not been rescraped, the gibs are at factory settings. And I have the stuff around to make up the screws, handwheels, and even vertical head. Score! 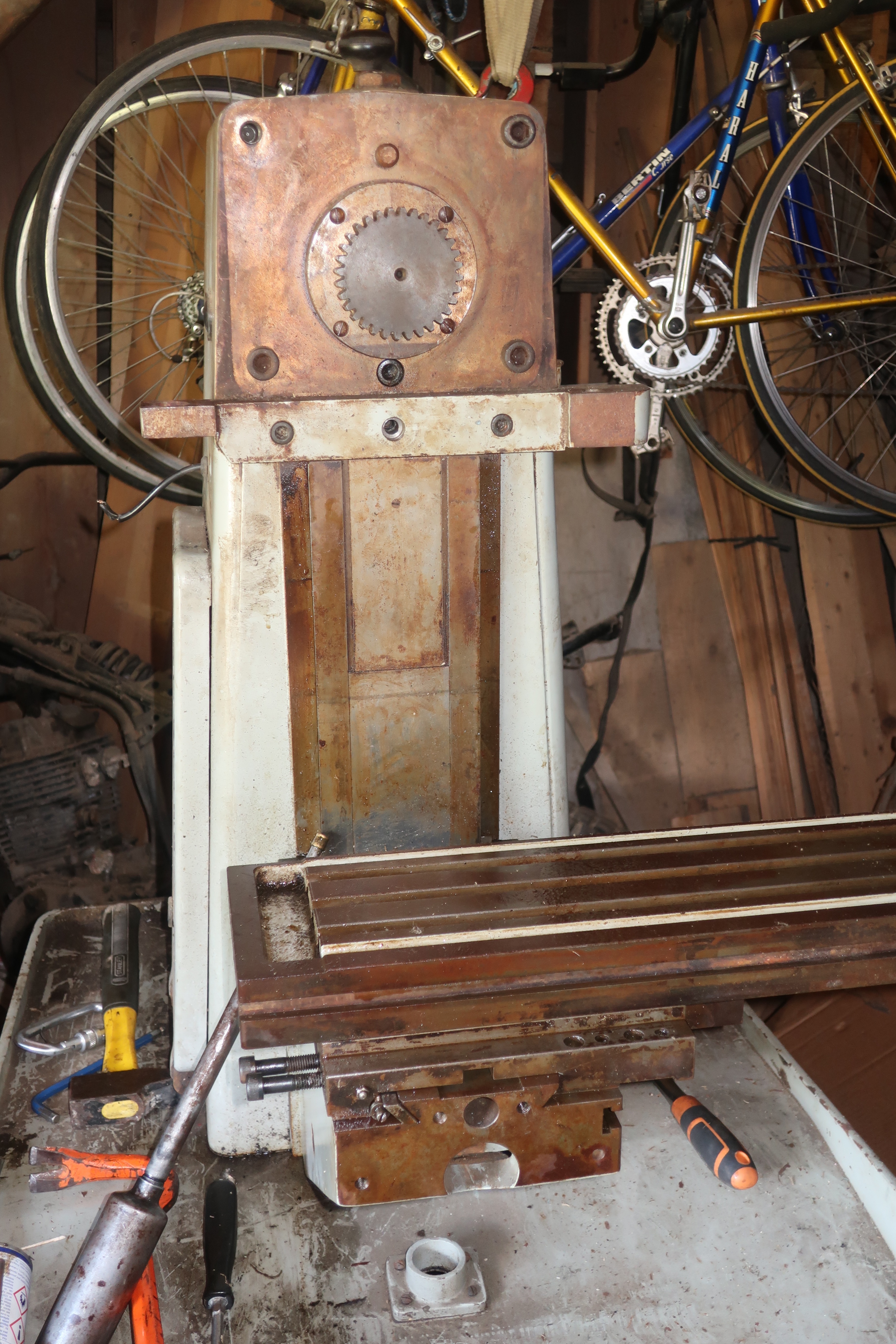 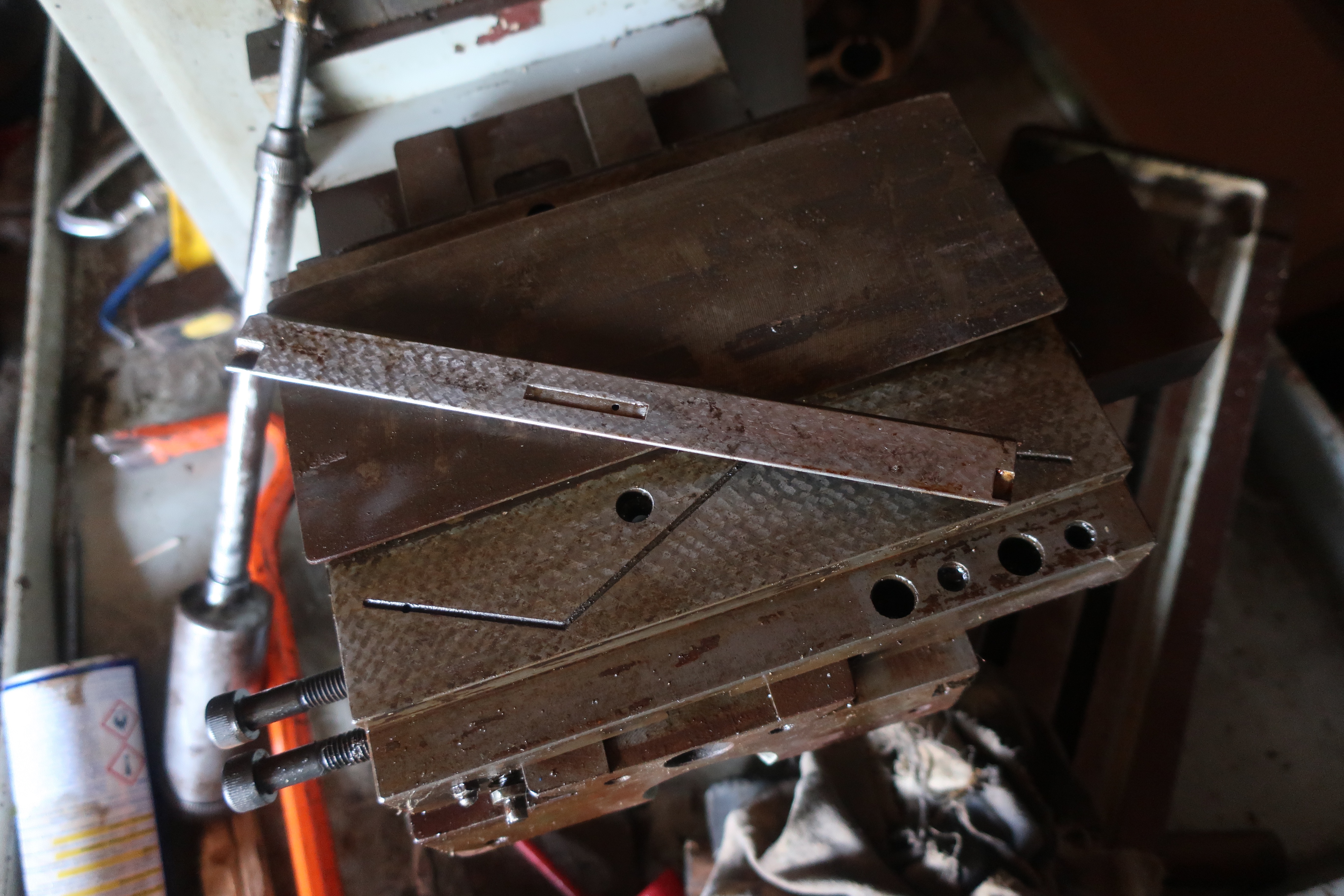 Great finds tufty! I bought a lathe in 2014 for 350 euros and it's a total piece of shit haha
Quantify the world.
Top

Even a shitty lathe is better than no lathe at all.
Top

Well it does take up a lot of space, so that's good
Quantify the world.
Top

There's visible play, I have pretty much no tools for it and the tool holder is diy. I think there's a crack in the casting at the termination point of the lead screw.

Ow. That does need some TLC.

DIY toolholders are no problem as long as they're rigid and you can shim your tooling to the right height. A bit more of a faff than quick change stuff, but still perfectly serviceable. If you have slop, you probably want to play with the gibs a bit (might lose you some travel if they're really worn), and possibly look at the headstock bearings if it's been abused (they aren't too expensive or even too difficult to change on a lathe of that type). There's mods that can be made to improve the carriage and cross slide gibs, too, before contemplating a full overhaul.

Tooling - get some cheapo carbide insert stuff from banggood or aliexpress. As phat as you can get into your toolholders.
Top
Post Reply
7 posts • Page 1 of 1